In June 2018 we published a briefing on the perilous state of the nuclear reactors at Hunterston and Torness.   The reactors at Hunterston have been offline since then while inspection of the graphite cylinders in the reactor core takes place. With around 28% of the core inspected the Ferret has now revealed that 370 major cracks have been found in the graphite core of reactor three and 200 cracks in the core of reactor four. To put this in context there are 3000 graphite blocks in each reactor.

EDF Energy who run the reactors intend to apply for permission to reopen production in March or April this year. In the view of environmental radiologist Ian Fairlie, who spoke at the Scottish Parliament and at meetings in Edinburgh and Glasgow this week such a move is fraught with risk. The level of damage to the reactor cores is such that they should be permanently shut down.

At the Edinburgh talk Ian noted that Hunterston is now probably the oldest operating nuclear reactor in the world. It first generated electricity in 1976 and was designed to run for 30 years. Currently it’s scheduled for closure in 2023. EDF have previously applied for five-year extensions and there is every likelihood they plan to do so again.

The cylindrical graphite blocks are critical to the stability and safety of the reactors. The cracks form in pairs, running the full length of the cylinders and splitting them apart. Under normal conditions the others around them hold the cracked blocks in place. However, a sudden outage, steam surge or earth tremor could result in a serious accident and a large release of radioactive gas. If other safety systems were to fail – and they are untested – there is a possibility of a catastrophic accident on the scale of Chernobyl.   The direction of the prevailing wind would take the radioactive plume across Glasgow, Edinburgh and most of the central belt. 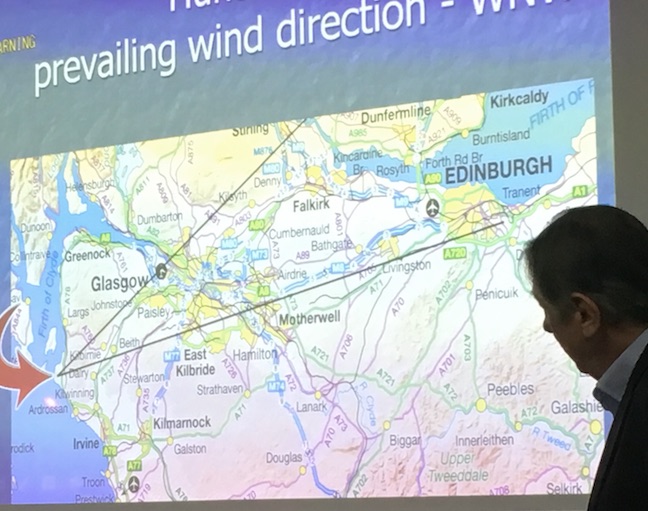 EDF are under political and economic pressure to keep the reactors operating. The political pressure comes from Westminster and a strong emphasis on nuclear. The economic pressure is arguably more acute. EDF are in a financial crisis, €37 billion in debt and needing more than €200 billion to bankroll commitments in construction, refurbishment and decommissioning. Hunterston and Torness, when operational, are a significant source of income to the firm.

The continued operation of these aging power stations is a real threat to the lives and well being of the Scottish population. Permanent closure and a focus on renewables is the safe and sustainable alternative.