The twin gas plants run by Shell and Exxon Mobil at Mossmorran in Fife have had a devastating impact on the lives of people living nearby.  At our 3rd June online meeting Linda Holt and James Glen from the Mossmorran Action Group (MAG) gave a presentation on the progress of the campaign.

In the discussion that followed Linda and James addressed questions about the campaign and participants shared useful links and ideas for solidarity and joint activity.

Linda noted that the MAG Facebook page is a really useful resource for following what’s happening and is used to share reports of flaring and other impacts from the gas plants.  However, Twitter has proved effective in pressurising the Scottish Government – the MAG twitter handle is @MossFlare – do follow and retweet.

We discussed the importance of phasing out Mossmorran as part of a Just Transition in Scotland and the opportunities for joint campaigning.

Linda and James talked about the SEPA investigations into Mossmorran and the limitations of SEPA as a Scottish Government Quango, whose board members are nominated by Scottish Government Ministers and dominated by representatives from the oil and gas industry.  There was strong support for replacing SEPA by an independent body that could take a critical view of government (in)action.  The UK Statistics Authority (UKSA) was suggested as an alternative model.  The UKSA has a statutory objective of promoting and safeguarding the production and publication of official statistics that ‘serve the public good’.

Prior to lockdown Climate Camp Scotland was planning its summer 2020 action at Mossmorran.  Local campaigners were highly supportive, and it’s hoped that action will take place in the future.

MAG has attempted to get data on cancer in the areas adjacent to Mossmorran but NHF Fife refuses on the grounds of data privacy.  The only data available covers an area so large as to be useless.

ExxonMobil and Shell largely employ workers from outside the local communities so that the communities don’t get to find out what’s really happening in the plants. Closing down Mossmorran would not have a negative impact on local jobs.  The skills of those who work at Mossmorran are valuable and with support for retraining could be redeployed into new sustainable industries.

It was agreed that there was a need to submit something more robust on Just Transition to the Just Transition Commission.  Scot.E3 is working on a document and will share with MAG before final version is produced.  The deadline is the end of June.

Information on ‘Cancer Alley’ in the US

The peak winds from Storm Jorge hit central Edinburgh as we gathered to send a message of solidarity to the Wet’suwet’en this afternoon.  Gusts of over 80 km per hour destroyed our main banner and numbers were depressed by the extreme conditions but more than 20 of us stood firm in solidarity.  Most passers by were unaware of what is happening in British Columbia but we got a good reception with many people stopping to talk.  The protest was called by Scot.E3 and  supported by Friends of the Earth Scotland, Young Friends of the Earth Scotland, Global Justice Now Scotland, rs21 Scotland, People and Planet Edinburgh, Edinburgh Youth Climate Strike, Green Anti-capitalist Front and XR Edinburgh.  The breadth of support provides a good basis for continuing solidarity actions as we build for mass mobilisation at COP 26 in Glasgow later in the year. 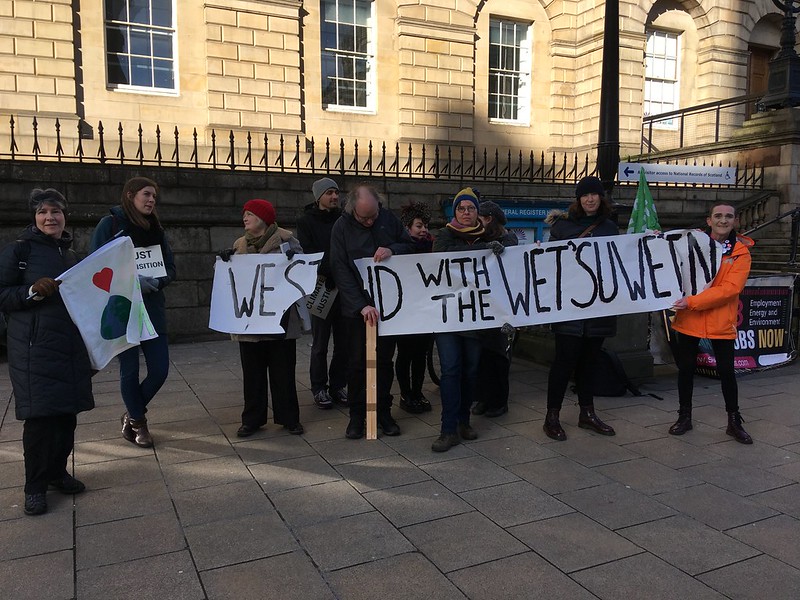 Donate to the Unist’ot’en 2020 Legal Fund

We are pleased to publish a contribution to the growing debate on the use of Hydrogen to replace north sea gas for domestic heating written by Pete Roche – the article was originally published in the bulletin of Nuclear Free Local Authorities.

An argument about the future use of hydrogen, in particular for heating, has been raging amongst energy professionals and lobbyists since the Government announced it was looking at setting a date by which all boilers on sale would be “hydrogen ready”, meaning they can burn natural gas but can also be converted easily to burning hydrogen. It was also announced that the natural gas supply at Keele University is being blended with 20% hydrogen in a trial that’s of national significance.

Households could soon be required to install a boiler capable of burning hydrogen when they next upgrade their central heating system. The government has already pledged to ban installation of fossil fuel heating systems in new homes from 2025. In November Sajid Javid, the chancellor, visited the headquarters of Worcester Bosch to inspect its prototype hydrogen-ready boiler. The company says the boilers would be available by 2025. They would be £50-£100 more expensive than existing boilers, which typically cost about £900. The benefit over existing boilers is that they can continue burning natural gas but be converted to burning hydrogen in an operation that will cost about £150 and take a gas engineer one hour.

The Department for Business, Energy and Industrial Strategy’s Hy4Heat programme aims to determine the feasibility of hydrogen for heating in homes and includes work with industry to develop prototype hydrogen appliances, including hydrogen ready boilers. About 1.7 million boilers are replaced each year so if they were required to be hydrogen-ready from 2025 most homes would have the necessary boiler by the mid-2030s to allow a switch to hydrogen. (1)

One of the arguments in favour of converting our gas boilers to hydrogen is that we have poorly insulated houses with insufficient space for installing a heat pump. If you were to design a heating policy from scratch, you would not choose hydrogen. You would build well-insulated houses that use electric heat pumps. (2) Worcester Bosch argues that a house needs to have an Energy Performance Certificate rating of C or above for a heat pump to be able to heat the house effectively. According to them of the 3,276,000 UK properties within the EPC band C rating, some 3,223,000 have a condensing boiler. One of the ways of jumping one clear band within the EPC methodology is to replace a non-condensing boiler with a condensing version. This means that many of the properties in band C are really constructed to band D levels of fabric and therefore unsuitable as they stand for a heat pump installation. (3)

Ed Matthew Associate Director at independent climate and energy think tank E3G says hydrogen is the wrong choice for heating homes. Blue hydrogen (manufactured from natural gas) needs CCS so would be massively expensive and keeps us hooked on gas. Green hydrogen (made by electrolysis using renewable electricity) is 4 times less efficient than using heat pumps. “Hydrogen is being pushed by the gas industry. Beware.”

Dave Toke, reader in energy politics at Aberdeen University agrees. He calls it: “the start of one of the greatest pieces of greenwash that have been committed in the UK.” The oil and gas industry is promoting so-called ‘blue hydrogen’, that is hydrogen produced by ‘reforming’ natural gas, and capturing the carbon dioxide that is produced. Yet currently most hydrogen is produced by reforming natural gas and not capturing carbon dioxide, a process that will dramatically increase carbon dioxide emissions if hydrogen is used to heat homes. The efficiency of the gas reformation process is only around 65% meaning that much more carbon dioxide is generated to produce the hydrogen as fuel compared to simply burning the natural gas. He says any claims that the process will be done using carbon capture and storage, beyond that is a few demonstration projects supported by public grants, should be taken with a wagon load of salt.

Richard Black from the Energy and Climate Intelligence Unit (ECIU) told BBC News: “We will and should have hydrogen in the mix of energy options, but it’s not a wonder solution to everything, which you sometimes get the impression from the rhetoric. There is hope – but too much hype.” (5)

Commentators also argue about the cost with some saying hydrogen will prove too expensive for mass usage, while others say switching to the use of electricity for heating will be far more costly than gas central heating and will put enormous strains on the grid during the winter months. However, heat battery manufacturer, Sunamp, claims that using an air source heat pump on off- peak electricity in conjunction with a heat battery can heat a house for a price comparable with gas central heating.

Lord Deben, chair of the Committee on Climate Change, has expressed confidence that a way will be found to produce hydrogen, which could provide a low carbon substitute for natural gas in heating systems, cheaper than is currently possible. (6)

The Commonweal Common Home Plan (see below) is sceptical about relying on the conversion of the gas grid to hydrogen. And moving to electric heating would roughly increase by a factor of five peak load on the grid which would require significant upgrades to cope. It prefers instead the idea of building district heating networks which can deliver heat from solar thermal, geothermal and industrial waste heat recovery.

New research commissioned by industry body Scottish Renewables shows the Scottish Government’s new Heat Networks Bill could see the equivalent of 460,000 homes – around a fifth of Scotland’s total – heated renewably by 2030, cutting emissions from heat by 10% and helping tackle the climate emergency. The research found 46 potential heat network projects across Scotland’s seven cities. The networks would initially serve 45,000 homes but could, with the right Scottish Government support, grow ten-fold by 2030. (7)

To date the Scottish Government has said the new Heat Networks Bill will “support, facilitate and create controls [for] the development of district heating” – but is yet to confirm the details. In response to this ongoing uncertainty industry has published, alongside the new research, a set of recommendations on how the Bill should support new projects. The potential projects represent a significant economic opportunity. Civil engineering such as the digging of trenches and laying of pipes accounts for 40% of a typical heat network’s costs, often using locally-sourced labour.

Star Renewable Energy, has installed a heat pump which can extract the small amount of heat generated by the Clyde. The river has an average temperature of around 10oC but engineers can boost it up to 80oC for use in homes. (8)

Meanwhile the HyDeploy pilot involving injecting hydrogen into Keele University’s existing natural gas network, which supplies 30 faculty buildings and 100 domestic properties is now operational. (9) And 7 industrial partners have been pledged to support a demonstration project in Denmark, which, with offshore wind as a power source, will produce renewable hydrogen that can be used in road transport. (10)

The scale of pressure on domestic gas boiler image by Marco Verch CC BY 2.0

We are really pleased that Simon Pirani will be speaking at the Scot.E3 conference on 16th November.  Simon is the author of ‘Burning Up: A Global History of Fossil Fuel Consumption’ (Pluto, 2018).  Here’s a video of him speaking about the book:

Daisy Jamieson was the third contributor to Scot.E3’s Glasgow public meeting on stopping North Sea oil and gas. In her talk Daisy reflected on the importance of just transition.  Part 1 of the public meeting can be viewed here and part 2 here.

Prior to the recent June general election it looked certain that a new Tory government would further ease the mineral planning regulations in order to ‘liberalise’ the exploration and extraction environment for prospective oil and/or gas shale fracturing activities. One particular beneficiary of such a move would have been the petrochemical giant Ineos which over the past two years has continued to add considerable gas and oil infrastructure and gas onshore as well as offshore deposits to its Scottish monopoly portfolio.

However, the subsequent hung parliament has put such legislative moves on hold, although despite prevailing unfavourable market conditions outlined below, Ineos continues to lobby hard with a Scottish government ever attuned to the interests of corporate power. Brian Parkin explains.  Read the whole article here.