The UCU (the union that represents University Lecturers across the UK and College Lecturers in England and Wales say “Greta Thunberg’s call for a climate strike and for adults, workers and trade unionists to join the global school students’ strike on 20 September 2019 is one that trade unionists from all unions must take seriously.” UCU are bringing a motion to the TUC Congress (8-11 September) for the TUC to call a 30 minute workplace stoppage on the day of the strikes. Full text below and here: https://www.ucu.org.uk/article/10181/30-minute-solidarity-climate-stoppage

This would be the first time in over 30 years that the TUC has issued such a call on any issue. To get this motion passed, UCU will need to demonstrate how widespread the support for it is. Please sign  and share, whether you are a trade union member or not.

Sign up here to support the call for a 30-minute workday stoppage in solidarity with the global school student strike on 20 September 2019: https://www.ucu.org.uk/article/10202/Support-the-30-minute-solidarity-climate-stoppage

You don’t have to wait for the TUC conference – see the model motion that you can use now and this video that looks at how to argue for a strike in your workplace. 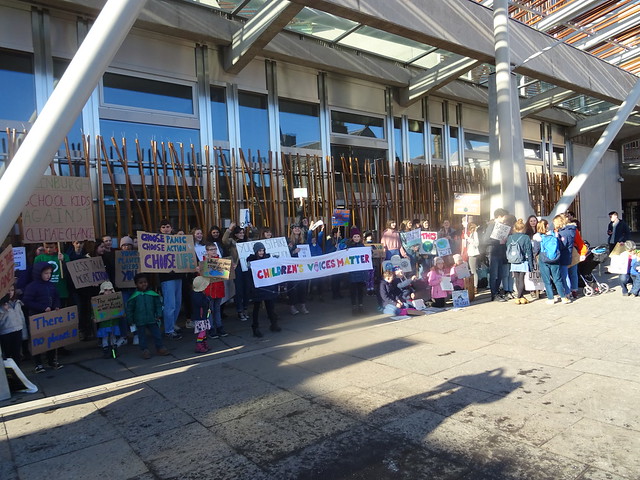 A month ago we reported on the launch of the “Fife Ready For Renewal” campaign to insist that production work for the new Neart na Gaoithe wind farm should take place at the currently unoccupied Bifab yards in Burntisland and Methil.  On Friday 5th July the campaign stepped up a notch when 100 pickets assembled in Edinburgh.

Ex-Bifab workers, reps of 5 or 6 unions, School Strikers, ScotE3,  Friends of the Earth and others surrounded the EDF Renewables HQ in Morrison Street, Edinburgh. An expert bugler, echoing his fanfares round the tall buildings, attracted a lot of passing attention. No uniformed police. Four School Strikers were lined up behind a very long banner. They were shy so we got them to go to the front. Good speeches. The plan had been to present a letter to EDF, listing questions and demands. But we arrived to find their door locked. So the questions and demands were magicked onto two long scrolls, which were displayed at the front of the protest and photographed. Then it was decided we should march round the side of the building  to see if there was a back door open so the original letter could be presented. There was a back door – a big revolving one, behind which four large security guards retreated when they saw us coming – a lot of loud music and chanting by this time on a good PA system. Good large flags, multiplied by reflexion in glass walls. Two people were allowed inside to give the letter to the guards, then one worker managed to push his way backwards through the door with a big flag, which he waved at us through the glass with a big smile, while the guards pinioned him. There was a point when it looked as if the crowd would push through the door, but not this time. The guards nudged the worker back though the door, then decided to lock it. This was the best bit – a guard on his knees inside struggling to lock the door with a ground-bolt, but failing to get any of his big bunch of keys to fit. This gave a great photo opportunity, and was greeted with hilarity by the crowd, who offered technical training for EDF workers.

Thanks to Mike and Eileen for words and images.